Norrlands nation's Salongs­orkestern is the world's only nation orchestra that plays classical music!

We were founded in 1986 at Norrlands nation in Uppsala by Greger Andersson and mostly only played Wiener waltzes at balls. When Kurt Levin took over the baton in 1989 the orchestra widened its repertoir to also include chamber and symphonic music. From spring 2007 to 2017 Eva-Lena Holmstedt, bassoonist and chamber orchestra musician, conducted the orchestra.  Between the fall of 2010 and 2018 the orchestra was conducted by Pär Peterson, string pedagouge from Uppsala. Up until the spring of 2019 the clarinetist and music producer Max Låke held the baton. During the fall of 2019, the conduction was shared between Uppsala based music teacher Tobias Hall and professional freelance conductor Duk-Kyung Chang, native of South Korea. Since the spring of 2020 the orchestra has been conducted by the Royal College of Music student Gustav Aske Sønksen, originally out of Copenhagen, Denmark.

Salongsorkestern still regularly plays waltzes at nation balls each term as well as arranges its own, usually much appreciated, theme concerts in the grand hall of Norrlands nation. The orchestra, which has a typical symphonic orchestra assembly of strings, wood winds, brass and percussion, has around 50 members of which the majority are students with the music as hobby.

The orchestra is often available for different gigs and there are bookable smaller groups of musicians, namely a string quartet as well as a brass ensemble. Contact the first chairman for bookings!

Are you interested in joining the orchestra? Let us know! We have no auditions and welcome new members on recurrent so-called “open rehearsals”.

We rehearse every Monday at this time at Norrlands nation in the theatre (strings) and disco (wind instruments) to keep some social distancing during the COVID-19 pandemic.

If you want to join us, just write us an email! We welcome new musicians during the first weeks of the semester.

Concerts of the term

The concert planned on the 5th of april was being postponed to December 2020. 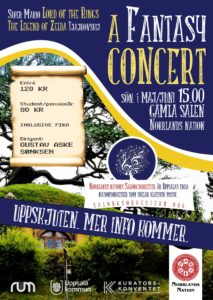